Did you know that studies have shown a high correlation between the infant death rate and the mother’s level of nutrition? And that the higher the mother’s level of education, the more her children will be in good health? Even if the lives of children and those of women are strongly intertwined, often through interdependent relations, women’s rights and children’s rights are frequently two separate chapters of international and national legislation and policy, as well as of development co-operation activities. And even more worrying, in some countries of the world, violations of women’s rights are caused by protective measures for children’s rights.

As part of the Conference – Celebrating 30 Years of the Convention on the Rights of the Child (CRC), which took place from 18 to 20 November at the Palais des Nations (UN headquarters) in Geneva, Enfants du Monde held a session on the necessity of articulating children’s and women’s rights during development co-operation interventions. This session was held in collaboration with the Association “30 Years of Children’s Rights” and the Centre for Children’s Rights Studies at the University of Geneva, and it was chaired by Koumba Boly-Barry, UN Special Rapporteur on the right to education.

Representing children from their country, two young Indian children’s rights activists, Reshma Khan and Jui Ghosh, members of the Youth Council of Terre des Hommes Switzerland, opened the discussion with their testimonials and thoughts. Philip Jaffé, a Member of the UN Committee on the Rights of the Child, and Carlo Santarelli, Secretary General of Enfants du Monde, described the main issues surrounding international legal tools, human rights policies and the practices of development co-operation organisations.

Recommendations favouring an integrated approach to children’s and women’s rights, which were drawn from the upstream thought process of 16 NGOs, were then presented and put forward for discussion by the 130 people present in the room. Projects undertaken in Colombia, Burkina Faso, India, Turkey and Lebanon were presented, as were areas of fertile ground worth considering for better synergy in women’s and children’s rights.

The recommendations from the session were presented by Jui Rosh and Carlo Santarelli on 20 November at a plenary session at the UN, and they will be published at the beginning of 2020. 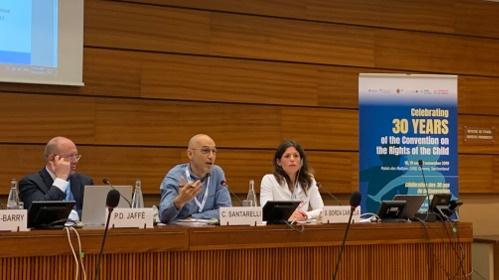