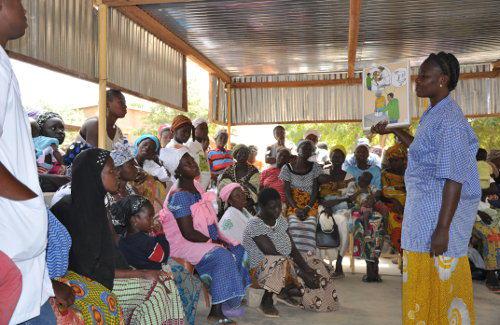 23.05.2017 – In the countries supported by Enfants du Monde, girls are often little or not educated at all, and women are only rarely independent, and bear various constraints in their daily life.

In a poor family, a girl must often stay at home and cannot go to school like her brother. Besides, she is frequently married early so that she is not a financial burden on her parents. In its education projects, Enfants du Monde focuses on schooling girls in order to allow them to be independent and liberated once they become adults. Meetings to raise awareness are organised for parents in the aim of them sending their girls to school. The fact that the lessons are both theoretical and practical, that the hours are adapted to the girl’s domestic chores and that there is the possibility to do an apprenticeship at the end of the program, are all primary incentives for families. An educated girl who will learn a trade and earn money will also be able to support her family and will no longer be a financial burden to them. In addition to this, for the girl, the prospect of an early marriage and an unreliable job becomes a distant thought.

Seen that a pregnant woman has little information on the progress of her pregnancy and her childbirth, and can only access a medical centre with the consent of her husband or her in-laws, Enfants du Monde insists on raising awareness through its health projects. Pregnant women and mothers learn how to take care of themselves and what their rights are with regards to their health. They are also informed of the risks during pregnancy and childbirth and are encouraged to keep records, and give birth in the presence of a qualified medical professional. However, the husbands and the in-laws play an important role in the health of the pregnant woman, of the mother, and of the newborn. For this reason, Enfants du Monde’s health projects involve them in the same way as the women.

More information on the attention given to girls and women in the Enfants du Monde projects.